The purpose of this test design is to determine the chronic toxicity of a plant protection product or chemical to honey bee larvae (Apis mellifera) after a repeated exposure until hatching of the adult bees. 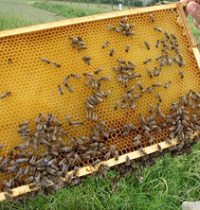 The larvae of honey bees are collected from adequately fed and healthy colonies originated from the ibacon apiary to guarantee well known history and physiological status. The tests are performed during the egg laying period of the queen. Three days before grafting the queens of minimum three colonies, each representing a replicate, are confined in their own colonies in an exclusion cage containing an empty comb. The exclusion cage is placed close to combs containing brood. The time of the isolated queens should be held as short as possible in order to minimise the variability in size and age between larvae. After release of the queens the combs containing the eggs are left in the cages inside the hives until hatching (D1).

The usual test duration is 25 days in total: D-3 to D1: in hive; D1 to D3: pre exposure; D3 to D6: exposure phase; D7 to D22: pre-pupal, pupal and hatching phase. During the lab phase the larvae are fed with special diets prepared from royal jelly and aqueous solutions of yeast extract glucose and fructose. Diet A, B and C are composed according to the needs of the larvae at different stages of development. Find a schematic representation of the important steps of the larval toxicity test in the following picture.

On D3, D4, D5 and D6, a minimum of twelve well-fed larvae from each of the three colonies are treated with 20, 30, 40 and 50 µl of the diet containing the test solution or reference item at the suitable concentration.

From D1 to D8 the larvae are kept in plexiglas containers placed in an incubator at 34 – 35 °C. A dish filled with saturated K2SO4-solution is placed in the plexiglas containers in order to keep a relative humidity of ca. 95 %. From D8 to D15, the rel. humidity is reduced to ca. 80%. During the hatching phase (D15 to D22) the larvae are moved into hatching boxes at rel. humidity of ca. 50 %.

At D4, D5, D6, D7, D8, D15 and D22 mortalities are checked and counted. . An immobile larva is noted as dead. Dead larvae and pupae are removed systematically for sanitary reasons. At D22 the number of emerged bees is determined and the test is terminated by freezing the exposure units at ≤ -10°C.

The LD50 (i.e. 120 hours, D8) with 95 % confidence limits of the test item and the adult emergence rate on D22 is estimated with suitable statistical methods, if indicated. Other endpoints like a NOEC / NOED can be determined, if appropriate.